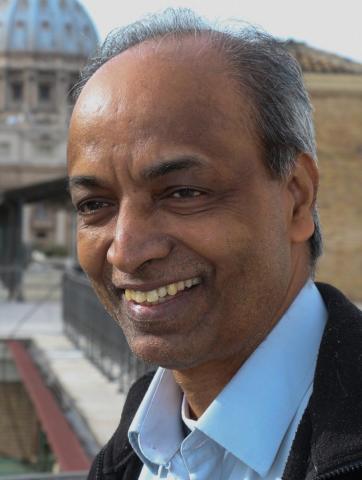 Dear Friends in the Lord,

Pegged on the northern tip of Latin America and surrounded by Venezuela, Trinidad, and Barzil, Guyana is an amazing territory and a fascinating story! It celebrated its fiftieth anniversary of Independence on 26th May 2016. Geographically, a Latin American territory, sharing the Amazonian forest with Brazil, extending to the coastlands on the Atlantic and having large arid land in the interior, Guyana shares a history with India, Africa, Europe, China, Latin America and the Caribbean Islands and in a way lives them all in her peoples today. That makes it a fascinating and challenging place.

The ten days that I spent in Guyana was an apostolic adventure. Fr. Paul Martin (Regional Superior) had meticulously planned the tour to keep me on my feet for all the ten days and to help me taste the engagements of Jesuits in this region; I am immensely grateful to him and to all the Jesuits of Guyana region.

Having journeyed through Panama City and Port of Spain (Trinidad) I arrived in Georgetown (The Capital city of Guyana) from San Salvador, on 16th May and soon went with Paul Martin, sj (Regional Superior) for a courtesy call on Bishop Francis of Georgetown, visited the one time Jesuit school (St.Stanislaus), the Memorial site of Bernard Dark, sj who was murdered right in front of the school during the political upheaval in the seventies, and prayed at the Cathedral. At the social in the evening at Arrupe Hall - the residence of the Regional Superior, I had occasion to chat with Jesuits of Georgetown.

Next day, with John Packiaraj (AND) I found myself traveling in a ten seater helicopter for an hour or so to Mabaruma in the North-West Amazonian region on Venezuelian border. At Hosororu, Amar Bage (RAN), Malcom Rodrigues and Innis Martin received us warmly at the all-wooden house made in Guyanian style. An hour long walk with seventy five year old Guyanese Jesuit Malcolm through the thick forest reached us to the boat bay and appetized us for lunch. Three hours’ boat ride in the after noon took us to the Venezuelian border;  all along river bank, there are mission stations where Amar goes for pastoral ministry to the Indigenous communities. It was both an exciting and daring trip, occasionally churning our stomachs up as the waves dangerously tilted our boat. Pastoral ministry in this region means long and daring travels by boat and ministering to the dispersed communities along the river banks. Large heart, good physical stamina and burning pastoral zeal marked Jesuit missionaries in this region.

On the following day, after another hour of Jet travel, we arrived back in Georgetown and a drive for two hours’ took us to Berbice, in the midland, to Britto Hall and parish where Jesuits run human development centre, reaching out to the poor and the unskilled of all religions. Berbice is a region predominantly of Indian origin people,  brought by the British as indentured laborers from U.P and Bihar, to work in the sugarcane farms. They are mostly Hindus and Muslims, with some new settlers from the Afro-origins. The Centre looks promising for a new paradigm of inter-religious dialogue for Guyana having a university centre close by. Guyana is religiously a very tolerant country. Ramesh Aravanan (KAR) Joachim D’Mello (GOA) and Mark Lakra (RAN) work in this Centre. Though Joachim (Superior) was away in Manresa attending the Ignatian Immersion Programme, I enjoyed the fruit of his labour of good papayas.

I spent a pleasant evening over a Chinese meal with Edward (BRI) and Godfrey, a Guyanese Jesuit, engaged in pastoral ministry in the town.  Anil Tirkey (RAN), Tony D’Souza (now a Guyanese citizen, originally from Bombay province and the eldest of the Indians), Jerry Dias (KAR) and John Packiaraj (AND) are engaged in pastoral ministry in the city and suburban areas of Georgetown. Britto Arockiam (MDU) on the same team was away on home leave.

Next day (20th May Friday) awaited a greater adventurous surprise – one and half Jet travel took us to Lethem on the border with Brazil and from there  four-hours’ drive through dusty and bumpy road on the trails led us to Aishalton – an interior mission with the Waphsiana Indigenous tribe. Varghese Puthussery (DUM) former provincial of Dumka and Edwin Anthony (KAR) are looking after this mission. Varghese has learned the Wapshiana language and has proposed an education model that seeks to include this tribal language in the curriculum. Guyana Govt is considering it seriously. On the Trinity Sunday we reflected on the imagery of Kanaku Mountains - as the abiding presence of the Father - Rupununi River - as the flowing power of the Spirit and the never-ending trails as Jesus the way. Resembling much the North Eastern tribal community, Waphsiana community is a joyful and promising group for the church in Guyana.

Another four hours drive took us back to Lethem, just before the rains that could have flooded the creeks on the road. At Lethem St.Ignatius mission is also the name of the village. Frs. Vellacada Poulose (KAR) and Fernandes Ronald (KAR) along with Abraham Andre (GUY) and Jim Conway (BRI) look after this mission. Next day morning along with Paul Martin, sj we drove to Karasabai into the interior village to meet with Jim Conway (BRI) the local superior and the Ranchi Ursuline sisters working in the mission. unfortunately, we could not travel to Kurukabaru, upon the interior mountains to meet Elias Surin (RAN). He is on his own in that mission; I would have been happy if I could have also met him, but for the time constraints.

Having completed the apostolic travels, we returned to Georgetwon after another Jet ride for one and half hours; at Arrupe community in Georgetown, we celebrated the concluding liturgy and dinner, just in time for me to pack and take a nap; Paul Martin drove me to the airport at 2 a.m. on 25th May for my flight to Barcelona/Manresa for my presentation at the Ignatian Immersion programme.

Few Jesuits in South Asia (let alone provincials) know that since 2000, starting with Stanislaus Arul (MDU), 37 Jesuits, from 13 provinces in South Asia had served Guyana Region. At present there are 14 South Asian (Indian) Jesuits from 14 provinces working in Guyana, Joseph Raj (CCU) being the latest and the first addition from CCU. They are working in Coastal belt and in the suburban are in pastoral ministry, in far away interior mission along Amazon River banks on Venezuela border and in the interiors on Brazil border.

They are serving the Afro-origin, Indian origin, Indigenous and Chinese descendent people, especially in pastoral care that is very challenging and promising. There are altogether only 26 Jesuits in the country of which 24 are priests, one scholastic and one brother. Besides the Jesuits, there are only ten more priests in the whole diocese/country.

This untold story of South Asia has potential both for South Asia and Guyana Region. South Asian Jesuits have already initiated a model of intervention with the Indigenous community in terms of augmenting their culture, language and community living (Varghese Puthussery took the lead). This could be further strengthened with enthusiastic young Jesuits from South Asia joining the Region. Guyana also offers a platform to experiment a new paradigm of dialogue in the multi-cultural and multi-religious situation; this is more significant especially because ‘religions’ manifest greater tolerance and  collaboration in Guyana; however it looks to me that Catholic pastoral approach remains in the traditional ground. A third significant potential for Jesuits from South Asia is to introduce and to learn from non-formal education pedagogy, interacting with Fe y Alegria model.

Guyana as a juridical entity in the Society is looking out to Latin American Conference for greater support; it is actively searching for collaboration with Antilles in the Caribbean belt; it is depending upon South Asia for Jesuit personnel resource; Britain continues its link and support for Guyana.

I hope that active dialogue with and collaboration between Guyana and JCSA will continue and get strengthened in the days to come. This is an invitation to South Asian Jesuits to volunteer for Guyana Mission; we are a universal body for the same universal mission.

Thank you Guyana; thank you Jesuits of Guyana Region; thank you South Asian Jesuits for your missionary zeal.