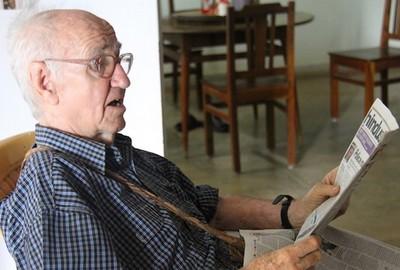 With his tall, lean and thin figure, wearing round glasses and carrying his prized possession — a cloth bag around his shoulder — Father Bob Slattery is not difficult to identify.

The Australia-born Jesuit, who has been in India for nearly 60 years, continues his work among socially oppressed Dalits and ethnic minority people in the Hazaribag region of eastern India.

The 83-year old landed in 1958 in this area, now part of Jharkhand state, where the Jesuit Hazaribag Province is based.

“I volunteered for India because as a Jesuit I thought it would be good to serve the poor,” said Father Slattery, currently development director of the Hazaribag province.

His day starts early with prayers and he works late until night as his hands are full with planning and finding resources for the welfare of the indigenous and Dalit people.

The job is basically “to beg for funds, a challenging task,” he said.

Ever since he started his mission in Hazaribag, teaching at St. Xavier’s School, where most children are from Dalit and ethnic minority backgrounds, his priority has been education.

“I think my first feeling was of challenge and at the same time of being accepted by the students and the Jesuits here. I was happy because I enjoyed teaching,” he said.

Jharkhand has 32 small and big indigenous groups, with Santal being a major one. According to the 2001 census, these communities account for 7 million of the state’s population of 26 million.

Father Slattery speaks the languages of the indigenous Santal and Oraon groups, which he says helps him relate to them. He often visits villages, which also gives him an opportunity to meet village leaders.

He prefers to take public transport in the impoverished region as it gives him more opportunity to communicate with locals and know their problems, he said.

Australian Jesuits have been focusing on education since their arrival in India in 1951. Their mission has built up 13 high schools, seven middle schools, 12 primary schools and numerous small village schools.

The mission, spread across seven districts in the state, provides education to about 25,000 students from primary level to university education.

Father Slattery, who has mostly served as a teacher and later as principal in various schools across the province, said he has always tried to maintain good relations with the staff and “I learned a lot from them.”

He has always cherished village life. “I liked it because the people were so good. We used to spend time in villages and stay around at night and rush to the nearby forest in the morning as there were no toilets in those days,” he said.

In 1978, Father Slattery was appointed as education director of the province. From 1993 to 1999, he was secretary for Jesuit education for South Asia and involved in launching schools in India, Pakistan and Nepal.

The priest takes simple meals like rice, Indian bread, pulses, vegetables and eggs. “I am blessed with good health, which I got from my parents. If you enjoy good health, naturally you will go ahead,” he said.

Father Slattery’s commitment to serve the indigenous and Dalit people in Hazaribag province was so intense that he gave up his Australian citizenship to become an Indian citizen in 1993.

“I thought if I got Indian citizenship I would have a good chance of staying in India,” he said, recalling that an Australian Jesuit was “evicted because he spoke up against the corruption in the country.”

The Jesuit priest keeps in contact with many of his students, even some he taught way back in 1958. He says it is great to meet them and learn that they are doing well.

Father Slattery says he enjoys being with students, teachers and fellow Jesuits.

“I will keep on working in the mission I have been given because that is what I am here for,” he said.