IN AN INTERVIEW WITH SCROLL.IN, RICHARD D’SOUZA SJ EXPLAINS THE SIGNIFICANCE OF THE FINDINGS HE AND ERIC BELL MADE AT THE UNIVERSITY OF MICHIGAN. 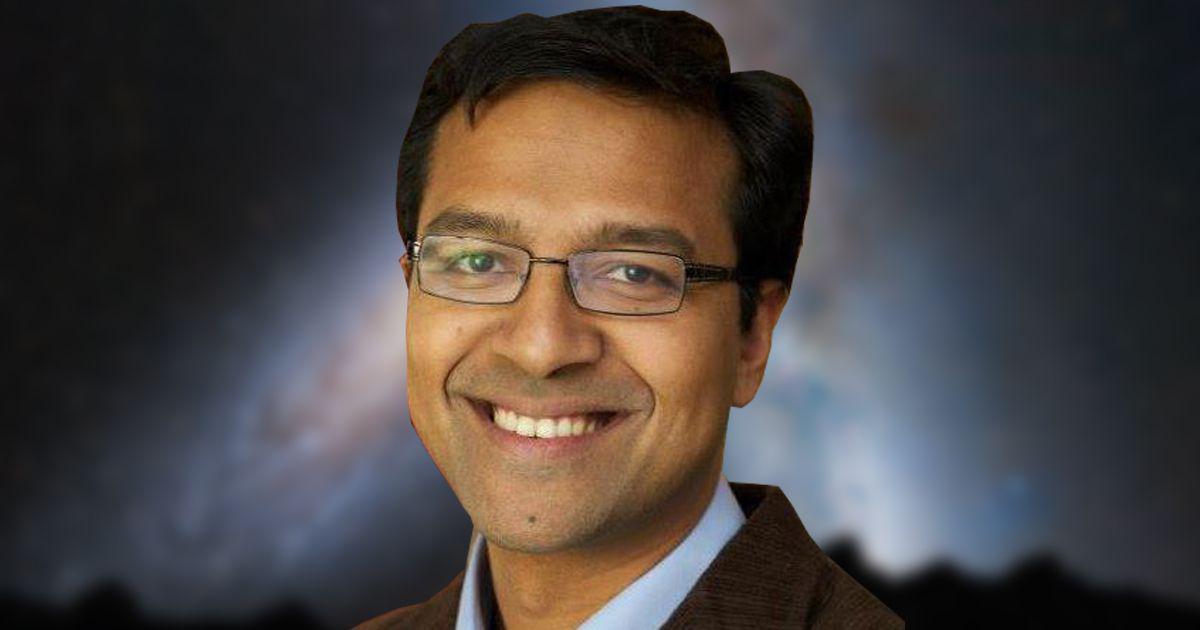 A recent intergalactic discovery making headlines across the world has an Indian connection. Earlier this week, it was widely reported that scientists Richard D’Souza and Eric Bell of the University of Michigan had deduced that the Milky Way once had a sibling, which was devoured by the neighbouring galaxy of Andromeda about two billion years ago.

The findings were published in the Nature Astronomy journal on July 23 and have grabbed attention for their potential to change our understanding of how galaxies merge and evolve over time.

When two galaxies are drawn together by gravitational pull, they stand the risk of colliding. In such an event, the larger one usually subsumes the smaller entity. Andromeda, the largest galaxy of the Local Group of which Milky Way is also a part, was long believed to have gobbled up several small galaxies over the years. Using computer simulations, D’Souza and Bell deduced that one of the galaxies that Andromeda merged with was in fact a massive one, the third-largest in the Local Group after the Milky Way.

The researchers have proposed that the stars of this shredded galaxy ended up surrounding Andromeda, giving it its outer faint stellar halo, and its intriguing satellite galaxy, M32. Scientists have for long being trying to decipher how M32 was formed, as it is a rare compact elliptical galaxy (unlike the Milky Way, which is spiral) that is rich with stars. The new findings propose that the undestroyed core of the cannibalised galaxy went on to form M32.

Described in media reports as Milky Way’s sibling or sister, the lost galaxy has been named M32p. The findings are interesting not only because they indicate that M32p’s core survived the collision, but also that the disk of Andromeda remained intact despite merging with such a large galaxy. This goes against traditional scientific belief that collisions between entities of this size would dramatically impact the structure of the surviving galaxy.

D’Souza, the lead author of the paper, comes from the Indian state of Goa, where his family still lives. He is doing his post-doctoral research at the University of Michigan. D’Souza is also a Jesuit priest and is a staff member of the Vatican Observatory, an astronomical institution supported by the Roman Catholic Church.

D’Souza has had a long and illustrious academic record and has studied an interesting mix of subjects. He was born in 1978 in Pune and spent his early years in Kuwait. In 1990, he moved to Goa, where his family still resides, and joined a Jesuit school. He did his BSc in Physics from St Xavier’s College, Mumbai, followed by an MSc at the University of Heidelberg in Germany. He then returned to Pune and got a second Bachelor’s degree in Philosophy, followed by one in Theology. He got his PhD in Astronomy from the Ludwig Maximilian University is now doing his post-doctorate from the University of Michigan.

In an interview with Scroll.in, D’Souza talks about his interesting academic graph, how his religious and scientific pursuits inform one another, and what his discovery means for the future of the Milky Way. Excerpts:

For a layperson, how would you explain your recent discovery?
My research centres around how galaxies grow through mergers. Over the course of its lifetime, a galaxy like Andromeda, our nearest big neighbour, is thought to have merged with hundreds of smaller galaxies, due to the attractive forces of gravity. These smaller galaxies are destroyed in the process due to tidal forces of gravity leaving behind a trail of stellar debris (like ‘crumbs’) around the main galaxy called its stellar halo.

By studying the stellar halo of a galaxy, I have developed a technique of inferring the size of the largest galaxy that was destroyed in the process. This is similar to guessing what a small child has eaten after looking at the ‘crumbs’ and mess scattered on the floor around it!

Observations over the last decade have shown that Andromeda has the largest stellar halo for any galaxy its size. We realised that to build such a large stellar halo, Andromeda must have merged with a really large galaxy. We can best understand this through a business analogy. Just like companies, galaxies also grow through mergers. Now a company can grow moderately in size by merging with other smaller companies. But if a large company wants to make a major spurt in growth, it needs to negotiate a merger with another significantly large company. Similarly, based on observations of Andromeda galaxy’s large stellar halo, we inferred that it merged with a significantly large galaxy (1/4th its size) not too long ago. How many years was this finding in the making? And what was the nature of your research work before that?
We started thinking of this project about a year and a half ago!. Last year around this time, we began writing it up, and we were mostly done within six months. The review process through the Nature Journal took an additional 6 months. Previously, for my PhD at the Max Planck Institute in Germany, I focused on obtaining deep observations of the stellar halos of more distant galaxies.

How does this discovery change our understanding of the universe? University of Michigan’s press release says that this could “alter the traditional understanding of how galaxies evolve”. Could you elaborate?
It was traditionally thought that such large mergers would destroy the disks of galaxies converting them to spheroidal elliptical galaxies. We now know that the disk of the Andromeda galaxy survived this particularly large merger, though we don’t know exactly why. So, this finding upsets a major paradigm in our understanding of galaxy evolution. One thing we can take away is that the disks of galaxies are more resilient that previously thought. We hope that this finding motivates further studies to understand in what particular circumstances do the disks of galaxies survive such large interactions.

What is the significance of the fact that Milky Way had another sister galaxy? How is a galaxy qualified as a sibling galaxy?
The Andromeda and the Milky Way galaxy are relatively close by, and are the largest members of the ‘Local Group’ of galaxies. Astronomers have long studied the Local Group including its smaller members, and thought they knew their local neighborhood pretty well. We now realise that there was another galaxy out there (which we call M32p) which was almost half the size of the Milky Way and which was destroyed by Andromeda. This comes as a complete surprise! It makes M32p the third largest member of the Local Group. The next smallest member, the Triangulum galaxy, is at least eight times smaller than the Milky Way. So indeed, M32p was a long-lost sibling finally found. We joked among ourselves that it was ‘the missing family member’ nobody wanted to talk about.

Some scientists have talked about the likelihood of Andromeda colliding with the Milky Way some billion years from now. Does Andromeda’s consumption of M32p suggest more about that in any way?
The Andromeda galaxy is moving towards the Milky Way at about 110 km/s, and will eventually collide with it in about four-five billion years. Eventually, our galaxy will be part of the stellar halo around the Andromeda galaxy. Moreover, since both galaxies are large and comparable in size/mass, we suspect that Andromeda may not survive the collision, and may transform into an elliptical galaxy. This is just how the Universe is and how the forces of gravity work. We must remember that within a similar time frame, our own sun will turn into a red giant star, expand in size and make the earth inhabitable. That may be a far more immediate concern! You have studied theology, philosophy and physics. That’s an unusual and fascinating range of subjects. How do these fields differ and intersect?
Yes, the study of philosophy and theology gave me a chance to broaden my thinking. Philosophy taught me how to critique the science I learned in University including its assumptions and adopted worldview. Theology helped me reflect on deeper issues which motivates all of us humans: where do we come from, where are we going, and what is the meaning of life? Although I enjoy science, it is a bit restrictive and limited in its approach; philosophy and theology equipped me with tools to think and reflect on a broader set of issues and problems.

The Catholic Church has historically taken a stance that is somewhat antithetical to science. It is unusual, though not unheard of, to have scientists who are also priests. How do your religious and scientific beliefs interact?
It is rather unfortunate that the Catholic Church has historically made a number of mistakes with regards to the sciences, especially when it felt its power and doctrine threatened. However, it must also be emphasised that the Catholic Church in its own way through the development of Universities in Europe but also through the number of its clergy actively involved in the sciences down the centuries has contributed to its development. This part of the narrative does get left out!

I do not see any fundamental contradiction between my religious and scientific beliefs. They actually go hand in hand. My religious beliefs tell me that God created the world as something good according to some laws. This fundamental assumption assures me that the laws of nature are constant, and are actually worthy of being studied. This is why the sciences prospered in the West, as opposed to other cultures where the gods and hence one’s understanding of reality were more capricious and whimsical. For me studying the Universe helps me learn more about its creator. Hence for me, studying astronomy, the stars and the galaxies is an ultimate form of worship.

What drew you to studying religion and going on to become a priest?
I studied at a Jesuit school in Goa, and grew fascinated with the Jesuits there. It was there that the roots of my vocation began. Moreover, their long history of working in the sciences was a huge draw for me.

Where does astronomical research in India stand today? And do you have plans to return, after completing your post-doctoral research at Michigan?
There a number of excellent astronomical centers in India today, especially in Pune and Bangalore. Traditionally, the research in our country tended to be more theoretical, but that is quickly changing. Observational advances usually require larger investments, especially in terms of money and resources. Optical astronomy today is driven by new observational data, which in turn depends on having access to the right telescopes, instruments and resources. I think our Indian scientists would be able to much more cutting-edge progress if the Government invests more in instrumentation.

After my postdoctoral research in Michigan, I plan to return to the Vatican Observatory. I am open to opportunities to do research and collaborating with scientists in India!

Support our journalism by subscribing to Scroll+ here. We welcome your comments at letters@scroll.in.