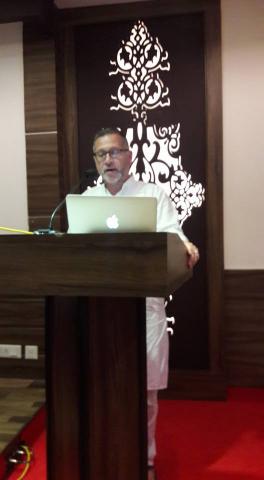 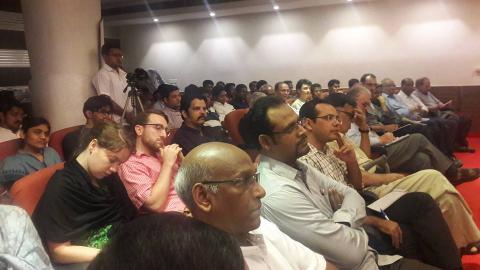 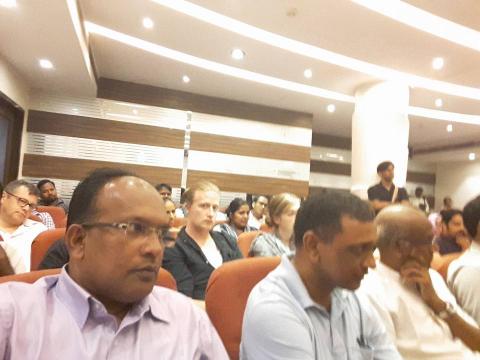 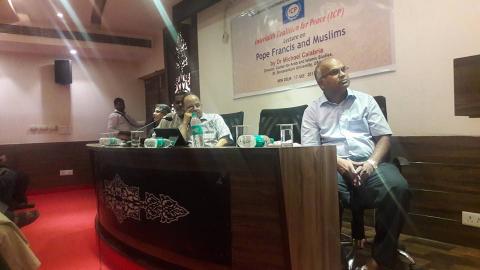 Today evening (17th July 2017) was really an experience to be remembered. It was a talk given by the famous Islamic scholar from US, Director of Centre for Arab and Islamic Studies, St. Bonaventure University on POPE FRANCIS AND MUSLIMS. I felt it was a much relevant and timely study for all in India too. Thanks to Interfaith Coalition for Peace (ICP).

The major points in his talks were of a comparative study on the attitude and world view of St. Francis of Assisi and Pope Francis. Starting from name itself to his world view to faith perspective....everything can be compared and found there is similarities.

In the summer of 1219, an itinerant preacher in a patched brown robe crossed the Nile River with a companion to reach the camp of the Sultan al-Malik al-Kamil. While Crusader commanders readied their weapons, he announced the peace of Christ in way that seems to have pleased and impressed his Muslim host. In time, this preacher became a much loved saint: Francis of Assisi.

Though most are familiar with Francis’ commitment to evangelical poverty and his sense of brotherhood with all of creation, few are aware of St. Francis’ simple yet dramatic gesture of friendship towards the Muslim ruler of Egypt. Given the recent flurry of talk about St. Francis due to the Pope’s chosen name and his references to Francis, we hope to shed some light on this lesser-known aspect of Francis’ ministry, which was a natural extension of his service to all people and his love of all creation.

In recent years, scholars, examining the writings of Francis following his encounter with the Sultan, have discerned elements that are suggestive of his experience of Islam while in Egypt. Shortly after his return to Italy in the summer of 1220, Francis wrote a Letter to the Rulers of the Peoples in which he enjoined all sovereigns to have an announcement of some kind made every evening that would call people to give praise and thanksgiving to God. Coming so soon after his time in Egypt, it seems likely that Francis was recalling the Muslim adhaan, or call to prayer. Later in 1224, when Francis was in a time of intense meditation on Mt. La Verna, he wrote a prayer known as The Praises of God. To many, Francis’ simple invocations to God as love, charity, wisdom, joy, etc. are reminiscent of the ninety-nine Beautiful Names of God  from the Islamic tradition.

That Francis, a devout Christian, might adapt and incorporate Muslim prayer forms into his own is not surprising, as Francis attributed all that is good not to any one people, but to God, the source of all that is good. Francis may have come to the encounter with al-Kamil with the intent of conversion, but he left with something unexpected: an admiration for the frequency and fervency of Muslim prayer.

Francis’ belief that God can be found in all people and “in all things” was later echoed by the founder of the Society of Jesus, St. Ignatius. The message of Francis and Ignatius proved foundational at the Catholic Church’s Second Vatican Council (1962-65), particularly in the Church’s Declaration on the Relationship of the Church to Non-Christian Religions (Nostra Aetate) which speaks of the “rays of Truth” reflected by other faith traditions.

Francis’ example and Church teaching tell us that we can still be true to our own Christian faith–and actually deepen it– while honoring and drawing from the truth, wisdom and beauty found in other religions.

We also look to Francis for an example of how to engage in dialogue today, in the midst of the hateful rhetoric and outright violence that often characterize interactions between Christians and Muslims. While Pope Innocent III called for a Crusade to eradicate Islam in the Holy Land, Francis chose the unpopular and dangerous path of compassion and peace, even though the cardinal leading the crusade opposed his mission. Francis lived dialogue; he didn’t just talk it.  He formed a relationship – perhaps even a friendship – with the Sultan, allowing the time he spent with the Muslim leader to change him for the better.

It is this example of lived dialogue that we must try to emulate in the midst of the hateful rhetoric and violence that often characterize Muslim-Christian interactions, and even in India the Hindu-Muslim hatred and violence.

All examples show that Francis’ papacy may bring a much-needed change in tone and a re-commitment to dialogue.  As more information has emerged about Bergoglio, we’ve learned that the cardinal was a real unifier between Jews, Muslims and Christians in Argentina.  In 2010 he published a book, On Heaven and Earth, with his good friend, Rabbi Abraham Skorka.  It records their own personal conversations about religion, and in it, Bergoglio writes this:

“Dialogue is born from an attitude of respect for the other person, from a conviction that the other person has something good to say. It assumes that there is room in the heart for the person’s point of view, opinion, and proposal. To dialogue entails a cordial reception, not a prior condemnation. In order to dialogue it is necessary to know how to lower the defenses, open the doors of the house, and offer human warmth.”

Muslims worldwide are likewise optimistic about the Pope. In Italy, the Italian Islamic Religious Community issued a statement saying, “As Muslims of the West, we take as a particularly hopeful sign the reminder, in the name of the new pontiff, of the great example of sanctity and opening to the East and to Islam that St. Francis of Assisi gave.” At the Grand Mosque in Paris, clerics said they hoped the Pope would be inspired by his link to St. Francis, “who at the start of the 13th century voluntarily initiated the first Islamic-Christian dialogue in history.” In the Pope’s homeland of Argentina, Galeb Moussa, the president of the Federation of Argentinian Arab Organizations said: “We have a lot of faith in the breadth of his vision and his openness to dialogue.”

Like his namesake, Pope Francis does not have professional expertise in Catholic-Muslim relations, but it is his seeming humble and loving disposition that makes dialogue a such a natural activity for him. We hope that a commitment to dialogue continues to flow from Pope Francis’ unique combination of Jesuit and Franciscan charisms. Pope values relationship, not theological doctrines that divide people.

We hope that Francis and his poor Church can be an example for Catholics and all people around the world–that it will motivate them to embrace their neighbors (and even their enemies) as the Poor Man of Assisi did. The attitude of the Pope must perculate to all and must be followed by all the leaders of the Church and other religious heads, then this world will be a better place to live in for all in harmony and mutual respect.

Thanks to Fr. Edwin who moderated the session and lead the interaction so enriching.