Pope Francis approves four priorities for the Jesuits’ next decade 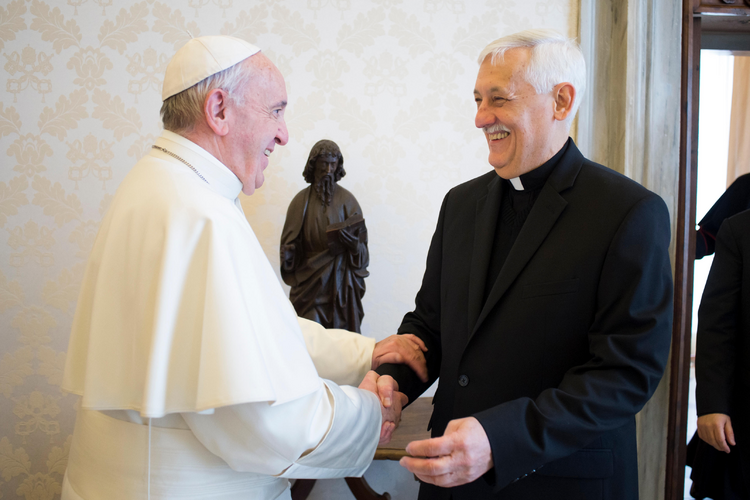 Pope Francis greets Father Arturo Sosa Abascal, superior general of the Society of Jesus, before a meeting with editors and staff of the Jesuit-run magazine, La Civilta Cattolica, at the Vatican Feb. 9. (CNS photo/L'Osservatore Romano, handout)

Arturo Sosa, S.J., the superior general of the Society of Jesus, today made public the four main reference points, known as “universal apostolic preferences,” that are to guide the life and work of the Jesuits over the next 10 years. He said Pope Francis has approved these four preferences and entrusted them to the Jesuits as their “mission.”

Father Sosa presented these four universal apostolic preferences in a letter to Jesuits worldwide, which was released today. They are:

The Venezuelan-born Father Sosa, 70, who was elected superior general of the Jesuits on Oct. 14, 2016, during the 36th General Congregation, explained the background and significance of the U.A.P.s at a briefing at the Jesuit Curia in Rome on Feb. 16.

He recalled that the 36th G.C. asked him to continue “a process of discernment” and to review the preferences that had been approved in 2003 and “to update their specific content and to develop plans and programs that can be monitored and evaluated.” His Dutch predecessor, Peter Hans Kolvenbach, S.J., had carried out a similar discernment and in 2003, with Pope John Paul II’s approval, prioritized ministries in China, Africa, the intellectual apostolate, the Roman houses and among migrants and refugees.

“We have engaged in a common discernment on what reconciliation means as the common thread for the work of the Society in the coming years.”

Father Sosa reported that since October 2017 “we have engaged in a common discernment on what reconciliation means as the common thread for the work of the Society in the coming years” and “to see how to make this reconciliation concrete in our work we started this common discernment in the Society.” He said “the novelty” in the process was that “it involved all Jesuits worldwide and those working with them in apostolic works, including lay men and women, as well as men and women religious from other congregations who cooperate with us in apostolic works.”

He said he wrote letters to the Society to prepare Jesuits for this common discernment. The first emphasized that “the mission involves our whole life; it’s not just a job.” The second explained the two-year discernment process and emphasized that discernment was first of all “spiritual,” not just a process of “strategic planning”; its aim is to discern certain movements of the Holy Spirit that demand attention and resources. He said this entire process “involved the grassroots structures of the order in the provinces and the regions” as well as the places of formation, thus engaging the younger Jesuits and those linked to the Society’s apostolic works.

Then in early January 2019, he said, the council of the superior general, aided by an external person, Dr. Christina King from Singapore, brought all this together in a document that he presented to Pope Francis on Jan. 17. He said the first Jesuit pope spent some time praying on the text and then handed it back to him on Feb. 9, entrusting it as a mission for the whole Society over the next decade. “In this way,” he said, “the preferences are not just our ideas; they are a mission given by the church through the pope to the Society.”

“The preferences are not just our ideas; they are a mission given by the church through the pope to the Society.”

He said Pope Francis, in an accompanying letter written in Spanish and dated Feb. 6, told him he was consoled that the U.A.P.s were the result of a journey of “dynamic discernment” and not made in “a library or laboratory.” Francis said the preferences “are in harmony with the present priorities of the church [as] expressed through the ordinary magisterium of the pope, of the synods and of the episcopal conferences, above all since ‘Evangelium Gaudium,’” the programmatic document for his pontificate published in November 2013.

The Jesuit pope went on to emphasize that “the first U.A.P. is fundamental because it presupposes as a basic condition the relation of the Jesuit with the Lord, his personal and communitarian life of prayer and discernment.” He told Father Sosa: “I recommend that, in your service as superior general, you insist above all on this. Without this prayerful attitude, the rest will not function.” Francis thanked him for “this work, which I approve and confirm as a mission.”

With the publication of the U.A.P.s, the superior general is asking each of the world’s 15,536 Jesuits, each Jesuit community, province and conference of provincials, as well as their colleagues in mission, to discern how to implement these four preferences in their respective areas of work. He is reminding them to hear in them the voice of the Holy Spirit and to take appropriate action.

In today’s letter, Father Sosa elaborates on the significance of each of the four U.A.P.s. Briefing journalists last Saturday, he emphasized that there is “a dual dimension” to each U.A.P.: “We realize that unless we live the Spiritual Exercises—if we are not persons who engage in discernment—we cannot help others or contribute to others in discernment. We have to live them deeply, and we have to have the creativity to offer new ways of doing the Exercises.”

Commenting on the first U.A.P. (“to show the way to God through the Spiritual Exercises and discernment”), Father Sosa says in his letter, “we sense that secular society today profoundly challenges the church in its task of proclaiming the Gospel,” and “as believers we feel an urgent need to overcome both new secularisms and the nostalgia for cultural expressions of the past.” As Jesuits, he continues, “we resolve to collaborate with the church in experiencing secular society as a sign of the times that affords us the opportunity to renew our presence in the heart of human history.”

“We commit ourselves to help eliminate abuses inside and outside the Church, seeking to ensure that victims are heard and properly helped.”

He describes the Spiritual Exercises of St. Ignatius Loyola as “a privileged instrument for making the life and action of the Lord Jesus present in diverse social contexts of today’s world” and says, “therefore, we resolve to gain a deeper experience of the Spiritual Exercises so that they lead us to a personal and communal encounter with Christ that transforms us.” At the same time, he says, “we resolve to offer the Spiritual Exercises in as many ways as possible, providing many people, especially the young, the opportunity to make use of them to begin or to advance in following Christ,” and “we also resolve to promote discernment as a regular habit for those who choose to follow Christ” and “to make regular use of spiritual conversation and discernment in our implementation of the preferences at all levels of the life-mission of the Society.”

Turning to the second U.A.P. (“to walk with the poor, the outcasts of the world, those whose dignity has been violated, in a mission of reconciliation and justice”), Father Sosa writes, “the path we seek to follow with the poor is one that promotes social justice and the change of economic, political and social structures that generate injustice; this path is a necessary dimension of the reconciliation of individuals, peoples, and their cultures with one another, with nature, and with God.” Furthermore, he says, “We confirm our commitment to care for migrants, displaced persons, refugees and victims of wars and human trafficking,” and “we resolve to defend the culture and the dignified existence of indigenous peoples.”

Father Sosa’s letter appears on the eve of the Vatican summit on the protection of children in the church, and he adds, “we commit ourselves to help eliminate abuses inside and outside the Church, seeking to ensure that victims are heard and properly helped, that justice is done, and that harm is healed.”

“We resolve...to collaborate with others in the construction of alternative models of life that are based on respect for creation.”

Referring to the third U.A.P. (“to accompany the young in the creation of a hope-filled future”), Father Sosa recalls in his letter that the recent synod said that the situation of young people, most of whom are poor, is “a crucial place from which the Church seeks to perceive and discern the movement of the Holy Spirit through this moment of human history.” He reminds Jesuits that since this is the time when individuals make “the fundamental decisions by which they insert themselves into society, seek to give meaning to their existence, and realize their dreams,” it is “by accompanying the young in this process, teaching them discernment and sharing with them the Good News of Jesus Christ, [that] we can show them the way to God that passes through solidarity with human beings and the construction of a more just world.”
RELATED STORIES

He reminds his fellow Jesuits, however, “to accompany young people demands of us authenticity of life, spiritual depth and openness to sharing the life-mission that gives meaning to who we are and what we do.”

Reflecting on the fourth U.A.P. (“to collaborate in the care of our Common Home”), Father Sosa recalls that Pope Francis, in his encyclical “Laudato Si’,” “reminds us that all human beings share responsibility for care of creation.” He notes that “the damage done to the earth is also damage done to the most vulnerable, such as indigenous peoples, peasants forced to emigrate, and the inhabitants of urban peripheries.” As Jesuits, he says, “we resolve...to collaborate with others in the construction of alternative models of life that are based on respect for creation and on a sustainable development capable of producing goods that, when justly distributed, ensure a decent life for all human beings on our planet.” He reminds them that “the preservation over time of the conditions of life on our planet is a human responsibility of immense ethical and spiritual importance.”

Father Sosa concludes his 10-page letter by telling his fellow Jesuits, “With these universal apostolic preferences, we resolve to concentrate and concretize our vital apostolic energies during the next 10 years, 2019-2029. We accept them as a mission of the Church through Pope Francis, who has approved them by confirming the communal discernment that was undertaken by the apostolic body.” Moreover, he says, “it corresponds to us, as a body obedient to the Holy Spirit, to plan with diligence the implementation of the preferences in every dimension of our life-mission.” Finally, he reminds them that “the preferences seek to unleash a process of apostolic revitalization and creativity that makes us better servants of reconciliation and justice.”