YANGON, Myanmar — Pope Francis landed in Myanmar, and in a diplomatic minefield, on Monday.

In a first papal visit to the country, the pope met with Senior Gen. Min Aung Hlaing, the commander in chief of Myanmar’s military, which has driven more than 620,000 Rohingya Muslims out of the country in what the United States has called a campaign of ethnic cleansing.

The pope is scheduled to meet on Tuesday with Daw Aung San Suu Kyi, the Nobel Peace Prize laureate and de facto leader of the government, who has been widely criticized as complicit for her silence in the face of the slaughter.

In Myanmar, the pope will seek to strike a careful balance by maintaining his moral authority without endangering his tiny local flock.

The United Nations, the United States and others have denounced the murder, rape and pillaging of the Rohingya in western Myanmar as ethnic cleansing, but the pope has been advised by the Roman Catholic Church here not to utter the word Rohingya, for fear of aggravating the situation or of being exploited for domestic politics. 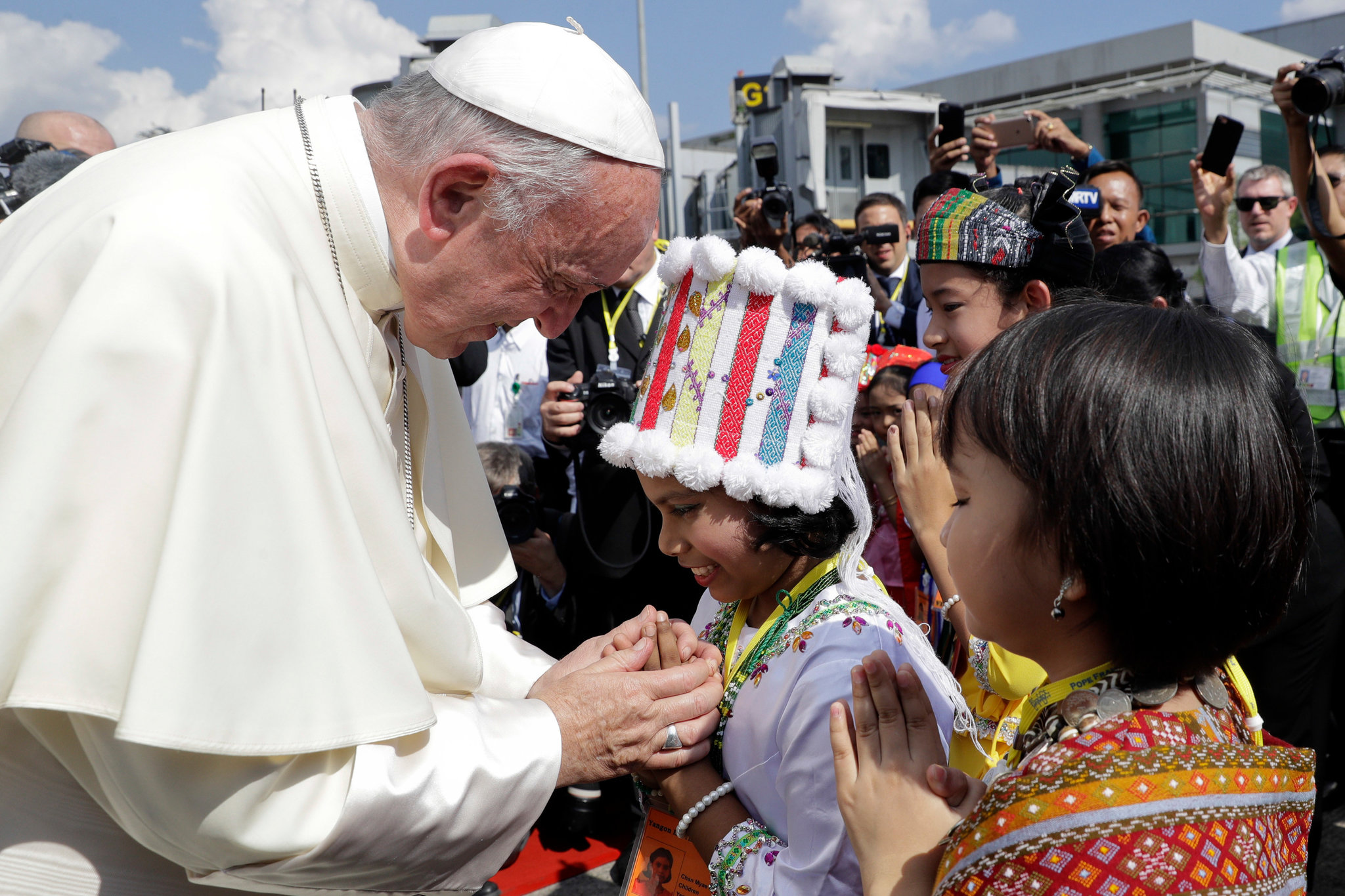 Despite the criticisms of Ms. Aung San Suu Kyi, the pope’s allies have urged him to lend her his support — and, they hope, political strength — as the country’s best chance to prevent a backslide into absolute rule by the military.

The Constitution, written by the military, puts the armed forces out of her control. And the military has enough support in Parliament to prevent any changes that could loosen the grip on power held by General Min Aung Hlaing, who has ambitions to run the country.

So for Francis, his first meeting here with the general, which was added at the last minute, might well be the more important one.

“It’s smart to meet the commander in chief first because he is very important and the principal person to solve this challenge facing our country,” said Dr. Yan Myo Thein, a political analyst in Yangon, Myanmar’s main city.

According to the Vatican, the meeting with the general and top commanders from the Bureau of Special Operations lasted about 15 minutes and was a “courtesy visit” at the residence of the local archbishop, where Francis is staying.

Greg Burke, the Vatican spokesman who is traveling with the pope, said they had discussed “the great responsibility of the country’s authorities in this moment of transition.”

A statement on the general’s Facebook page paraphrased him as telling the pope that soldiers sought to build a stable and peaceful country and “there’s no religious discrimination in Myanmar and there’s the freedom of religion.”

The pope then gave the general a medallion commemorating his visit. The general gave the pope an ornate rice bowl and a harp in the shape of a boat.

The timing of the meeting suggested that the pope was mindful of the egos and agendas that he must navigate without making a misstep that could endanger Myanmar’s 700,000 Catholics, who make up about 1.3 percent of the population.

If the gravity of the task weighed on him, he did not show it on the flight from Rome.

On the plane, Francis seemed in good spirits, apologizing beforehand for the scorching temperatures in Myanmar and announcing, “Now I will salute you.” He also walked through the cabin, gamely signing books and accepting the trinkets of reporters. 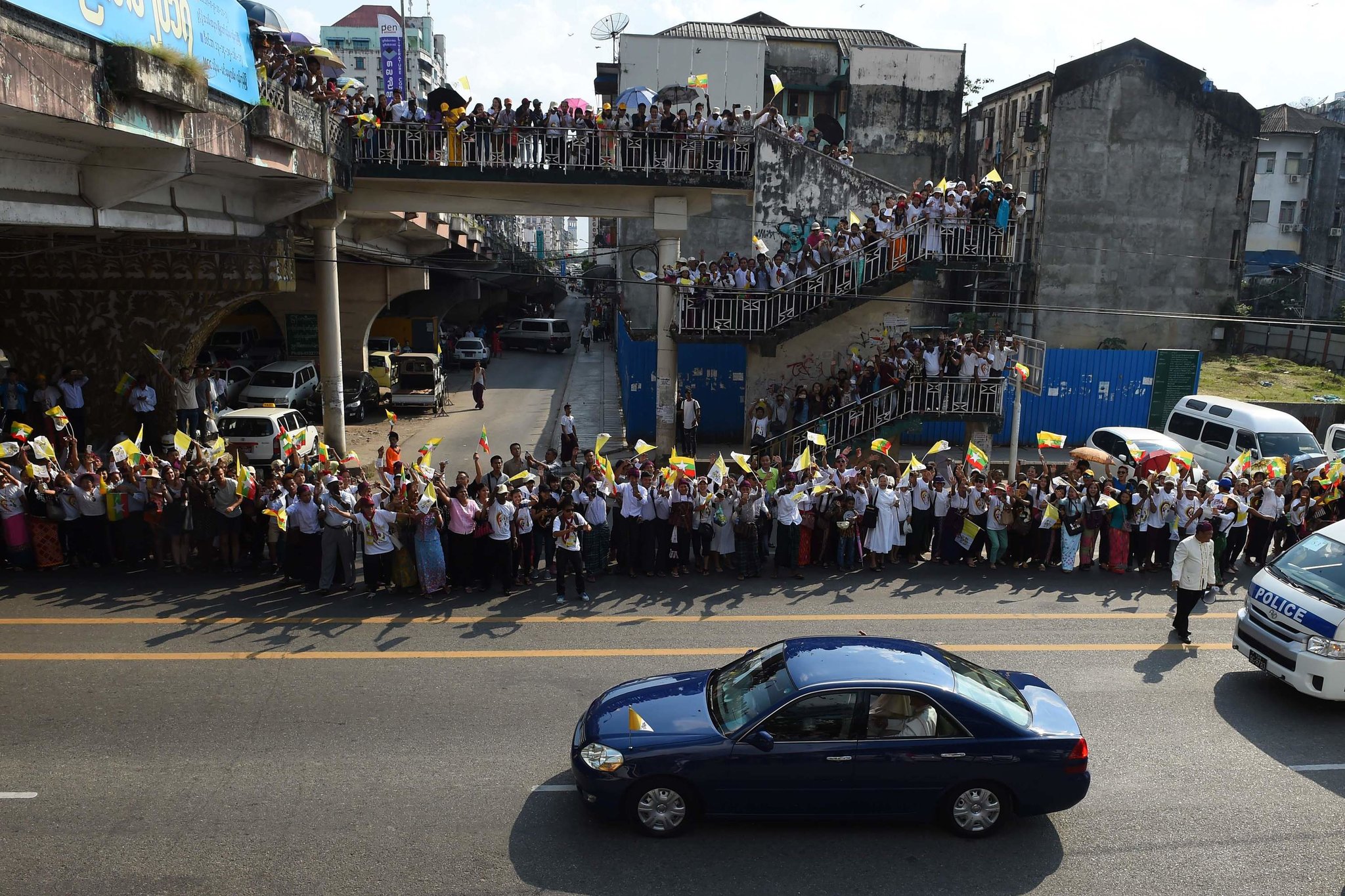 Upon arriving in Yangon, Francis was greeted on the tarmac by Cardinal Charles Maung Bo, the city’s archbishop, followed by local bishops and a delegation of children in traditional clothing.

As he left Yangon Airport in a Toyota Mark II Grande sedan, Francis rolled down a window to wave at hundreds more children cheering “Viva, Papa” next to curious backpackers and wary security officials. The surrounding streets were lined with young people in white T-shirts and yellow hats with the trip’s official emblem, a heart under the motto “Missionary of Love and Peace.” Some waved Vatican flags and had its yellow-and-white colors painted on their cheeks.

Those crowds thinned, though signs on lampposts extended “A Heartiest Welcome to the Holy Father Pope Francis, Missionary of Love and Peace.”

Copies of the Vatican’s newspaper, L’Osservatore Romano, which were made available on the plane, featured a front-page interview with Cardinal Bo in which the prelate said that the pope “will arrive in a moment in which the country is in the news because of the migration of thousands of people.” 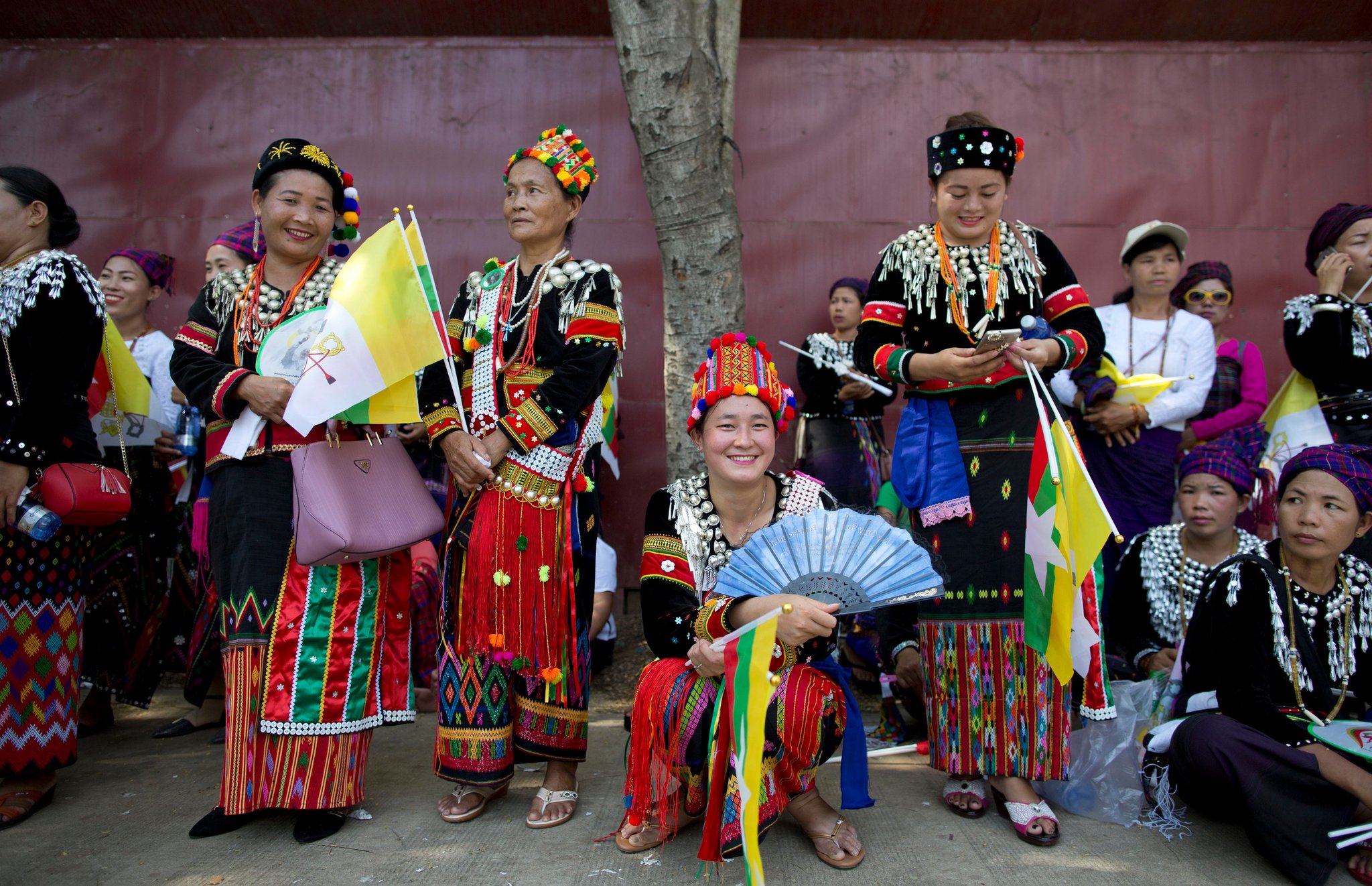 Catholics from the ethnic Kachin community gathered Monday to see the pope in Yangon as his motorcade passed. CreditGemunu Amarasinghe/Associated Press

“There is great hope that his presence will succeed in melting the heart of everyone and push the country towards a lasting peace,” the cardinal said in the interview.

The semantic flexibility — saying migration instead of ethnic cleansing, Muslims of Rakhine State instead of Rohingya — has introduced a degree of diplomatic absurdity to the visit, especially for a pontiff who has a reputation for speaking his mind.

In a certain sense, the trip may be a needless headache for Francis.

After a visit to India fell through, Myanmar filled a hole in the pope’s schedule. The trip was meant in part to celebrate and solidify the new diplomatic relations between the Vatican and Myanmar established during Ms. Aung San Suu Kyi’s stop at the Holy See in May. 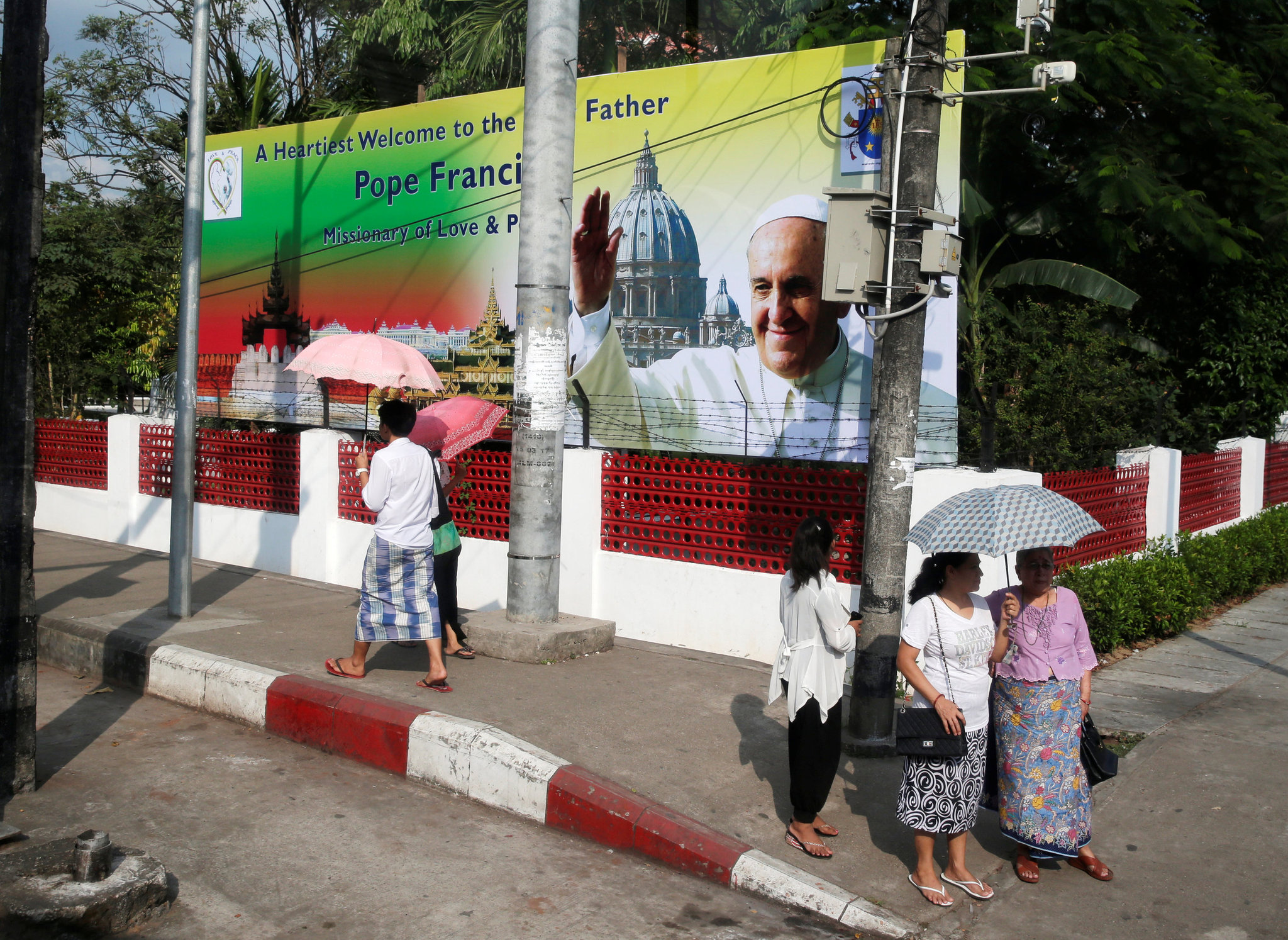 A banner welcoming the pope during what could be a fraught visit. CreditMax Rossi/Reuters

As the onetime darling of the humanitarian community and democracy activists, she was already starting to come under criticism at that time for the poor treatment of the Rohingya. The situation has since deteriorated, and her reputation has sunk as she has failed to confront a military crackdown on the Rohingya — or “those who have crossed over to Bangladesh,” as she has called them.

But the church’s leaders in Myanmar, especially Cardinal Bo, whom Francis elevated in 2015, have argued that the pope must invest in Ms. Aung San Suu Kyi, as she is perhaps the country’s last, and best, chance to proceed on a road to democracy and the protection of civil rights.

Francis is scheduled to fly to the capital, Naypyidaw, to meet her on Tuesday. 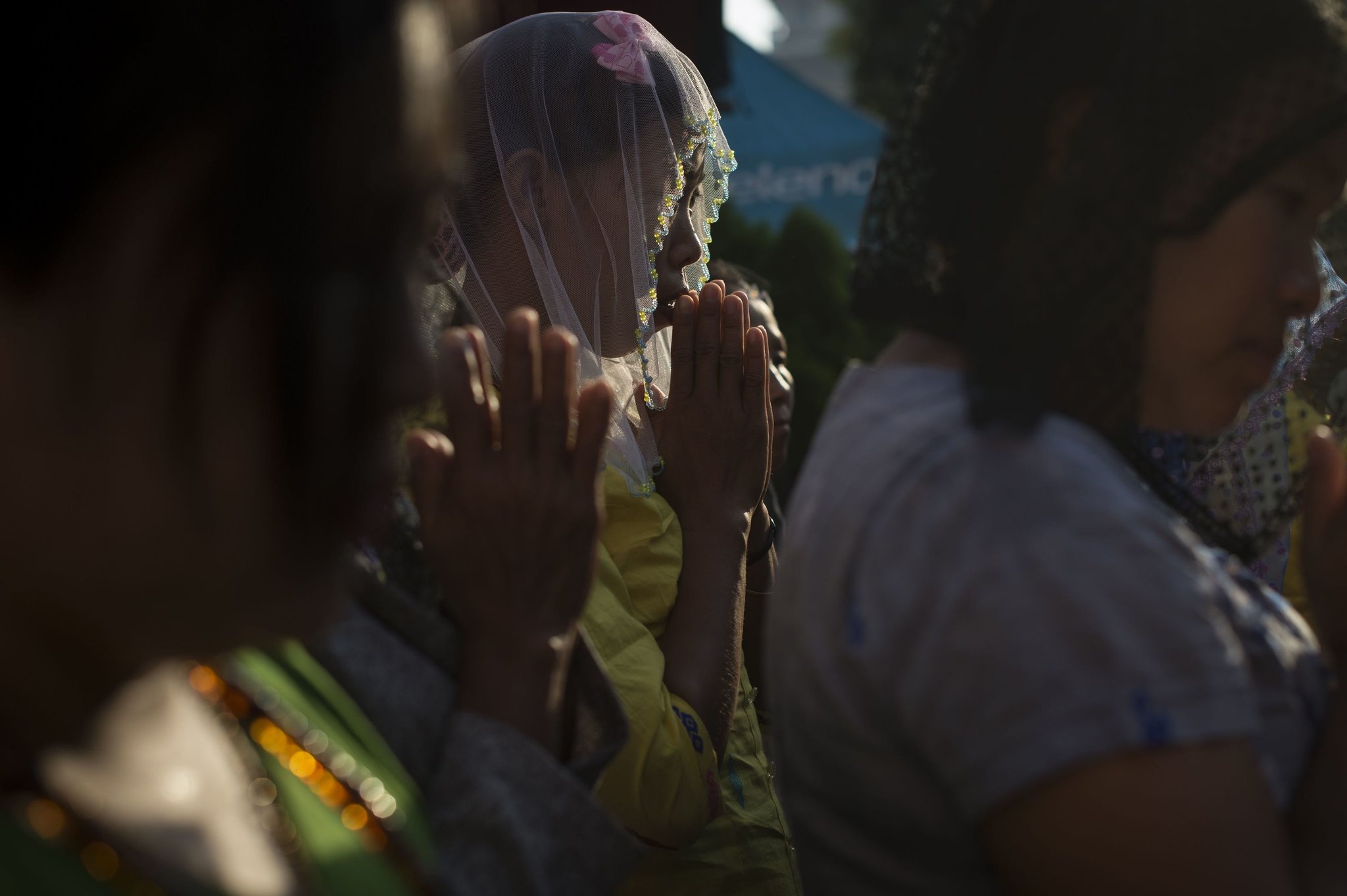 A version of this article appears in print on November 28, 2017, on Page A6 of the New York edition with the headline: Pope Begins His Visit to Myanmar by Meeting Military’s Leader.