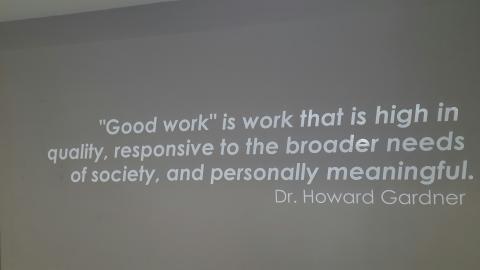 WHAT DO WE NEED TO TEACH IN SCHOOLS TODAY? IS CHARACTER EDUCATION NEGLECTED TODAY?

Recently some students had been to some of the well-known schools for practice teaching. They went with a well prepared programme, with innovative methods and up-to-date knowledge to share with the students.  However, many of them had the experience of indiscipline, rejection and above all having witnessed the permanent teacher’s helplessness in ‘controlling’ the class. One can give any number of justifications for this modern trend. However, a sincere analysis will tell us that this is the result of an utter neglect of value based education from the beginning of the schooling. A cut-throat competition, a ‘success’ oriented paradigm and only a cognitive focused education is not enough for a student, who is part of the society and the future of the nation.  There are obviously a chain of reasons for the problem of value degradation today. Every reason has a link in another, we agree. However, here we look at the ways and means to inculcate values in schools, in class room teaching, by delving into our own traditions, no matter what subject we teach. Our effort here is to see what we mean by value education, and how can we remedy the problem of insensitivity of a section of students.

The phrase 'Value Based Education', comes closer in meaning to the Sanskrit word 'Vidya' as it was used by the Acharyasof ancient India. 'Vidya' means that which illumines. As such, it was identified with knowledge that illumines the mind and soul. Since the imparting of knowledge was the aim of education, over a period of time, education also came to be known as 'Vidya'. But, the highest goal of Vidya as visualized by the seers and seekers was to understand the Ultimate Truth or Reality. The whole purpose of Vedic education was self-realisation. One cannot pooh-pooh the idea saying it is an old concept. God realisation through self-realisation was the aim of any education in the ancient times.

The more practical aspects of 'education' involved alongside intellectual training, the laying of a moral foundation which helped to make the individual a good citizen who was conscious of his innate strength. Swami Vivekananda points out "Education is the manifestation of perfection already existing in man". According to him that Education is required by which character is formed, strength of the mind is increased, intellect is expanded and by which one can stand on one’s own feet." Dr. S. Radhakrishnan emphasizes the role the heart needs to play in aiding the intellect. He says "Education to be completeit must be humane. It must include not only the training of the intellect, but the refinement of the heart and the discipline of the spirit". Education thus brings out all that is unique in the individual helping him to establish the right relationship with not only the life, mind and soul of the nation to which he belongs but with the larger life, mind and soul of humanity of which he is a unit. All religions have upheld the idea that man, more than being an economic, social, political or reasoning animal, in actuality is a spiritual soul limited by the various attributes of a human existence for the time span of his life on earth. Consequently a true education though nurturing the intellectual, aesthetic, ethical and vital aspects is essentially engaged in the task of awakening of the soul. This soul awakening education harmonizing the mind and body is to be valued as it reveals the truth of existence

In fact a student is like a seed. The seed contains potentially the future tree. But every seed does not actualise its potency. In order to actualise the potency it needs adequate amount of water, manure, soil and sun shine. The seeds get all these in a correct manner will actualise the innate potency. Similarly all the students who get the atmosphere of love, encouragement, values and support will only actualise the innate ability to be divine, or realisation of the god-self.The Christian concept and the Hindu concept of education are similar in this aspect. Both believe that the ultimate aim of education is to make a person to realise the real self that is a replica of the divine. The ultimate purpose of education is to create anappropriate atmosphere to the students to realise the purpose of his life on this planet.

In this light,education is a three - fold process. It imparts general and specific information, teaches skills and inculcates values. The present system of education is almost wholly geared to the first, a little to the second and only marginally to the third. For education to fulfil its purpose as a tool for social change and realize national objectives, it should as Sri Aurobindo writes "starting with the past and making full use of the present build up a great nation". The first education commission of India headed by Dr. S. Radhakrishnan emphasized that no amount of factual information would make ordinary men into educated or virtuous men unless something is awakened in them - an innate ability to live the life of the soul". Despite this recognition, education in the modern age is able to train only a fraction of the students mind and not the whole. The neglect of ethical values, which should form the substratum of any good education, has led to ineffectual, decadent, empty learning. It is the duty of every society to pass on the values enshrined in its scriptures and philosophical texts to each generation, in order, that the spirit of its culture lives on. This can be achieved only when education is value oriented.

Bharat is a country that’s religious and philosophical legacy dates back to ancient times. If the education system goes astray from the rich values, it is of no use. The future, therefore, lies in the hands of those who can put education on the right track again. And this is possible only for teachers.

When civilizations were learning to think clearly and trying to come out of the darkness of ignorance, the ancient Masters of Bharatwere enquiring on the nature of Truth. The enquiry started with'KOHAM', 'who am I'. Thousands of years ago Indian seers came to the conclusion that 'Truth was one which has been interpreted by the Learned in many ways, 'Ekam Sat ViprahBahudhaVadanti'. India possesses this treasure of knowledge for the entire humanity and this is needed by the whole world even today. The virtues of patience, tolerance and belongingness to one Great Master bring in the concept of 'VasudhaikaKutumbakam', Universal family. The highest goal of the people of Bharat has been 'LokahSamastahSukhinoBhavantu', 'Let all the worlds be Happy'. Indian culture never believes in narrow self-centered thinking. It promotes Viswasreyas, the universal welfare and collective happiness.

'Let all People be happy. Let all be without any ill health. Let Welfare prevail everywhere. Let there not be sorrow to any one'. This is the benediction given by the seers and sages to the entire mankind.

(Lead me from unreal to the Real, darkness to Light, death to Immortality), gives us the greatest self-confidence in performing our duties. It serves as a constant reminder to each one about one's own goal). We often wonder what happened to these superb values. How could corruption, selfish thinking, violence and injustice could gulp the fantastic and cherished values of our ethos? Today values have become words mired in controversy, embraced and despicable that we scarcely know how to use them, without turning them into slogans.With the advancement of technology, man himself is becoming machine. The reason behind this is that he is spending more time with machines rather than with human beings. Emotions, feeling, values and manners are disappearing day by day in human beings. So there is a strong need to make him aware of his responsibilities towards society, his family and others. A building cannot be strong if its base is not strong. In the same way a child cannot be a good man if he is not given good values in his childhood. Low moral values are pushing the youngsters toward alcohol, drugs, indecency and crime.

Government is spending more and more money to impart education to people. Also, crime is increasing day by day. So, two contradictory things are happening. With the increase in education crime and corruption should decrease. But the scenario is totally opposite. The reason is that government is providing qualification and degrees, not the education. Stress should be laid down to teach moral values and ethics to students along with teaching the curriculum. To save the world, to save humanity it is essential to make the students good human beings along with making them good professionals.

Mahatma Gandhi cited the major structural and collective sins of our time:

1. Politic without principles.
2. Wealth without work.
3. Pleasure without conscience.
4. Knowledge without character.
5. Commerce without morality.
6. Worship without sacrifice.
7. Science and technology without humanity.

Success today is all too often, defined by the power of the wealth that one holds. All the symbols, ranging from who occupies the best office, to the size of the paycheque, the brand of the modern gadget, exist side by side with mind dulling drugs, divorce, abortions, suicides, etc., etc. In this context teaching values in the school is a real challenge the teachers face.

So what the world needs today is neither a new order, a new education, a new system, a new society nor a new religion. The noble value exhortation formed the core of the ancient educational system that produced the greatest prophets, scientists, moralists, rulers and honest men and more than all these, a culture and civilization with which we have lost touch for sometime now. The philosophy of this verse which recommends mutual trust and cooperative effort on the part of the teacher and student is to be followed by everyone in the society.

The end of education lies in transforming the individual and elevating him to an egoless state. The purpose of education is to strengthen character in the younger generation which is an answer to many of the problems that face people today. It can bring about a widespread renewal of individual commitment to an active life of principle and this renewal is imperative. The common themes and concerns underlying the great religious cultures, both Eastern and Western, amount to a consensus regarding basic human values. Values like truth, right action, love, peace and non-violence include in a balanced way the profound moral insights of the great civilizations. They are derived from the universal order which upholds societal harmony.May the True Education 'Vidya' carry the message of serenity, humility and human compassion and wipe out the moral chaos prevailing in our society.

Tags:
The purpose of education is to strengthen character in the younger generation which is the answer to many of the problems they face today.