Waves of Extremism in North Eastern States in India Against Christians

Waves of Extremism in North Eastern States in India Against Christians 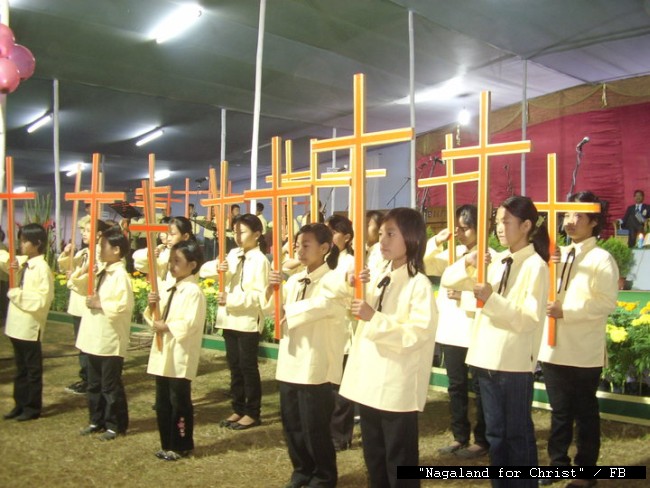 Many have seen the role of Christianity in India as a legacy of its colonial past, but this myth is refuted in studying the growth of Christianity in North Eastern states in India. North Eastern India refers to Arunachal Pradesh, Assam, Manipur, Meghalaya, Mizoram, Nagaland, Tripura and Sikkim. The historiography of North Western states in India gas particularly shown that those states were partially aloof from the common Indian culture and especially the cultural roots which are intrinsic to these states have not impacts from the either North Indian Hindu culture or Darvidian routines in India. Nevertheless the spread of Christianity in North Eastern India was mainly attributed to the Christian educational policy. After the annexation of Assam in 1829 to British Raj, British missionaries started their missionary activities in Assami]

The Barrister Pakem in his study of the interaction between Christianity and the people of Northeast India believes that “the prospects which Christian education has offered to the peopleof Northeast “compensates for any of its shortcomings”. The establishment of education through Christian schools laid a foundation to nourish knowledge among the backward tribal communities in North East states.[ii]

Before the establishment of Christian educational institutions in Northeast India, there might have been some general awareness that the people living in a particular geographical area are related to each other. Nevertheless, such awareness was definitely nonfunctional at the interactive level. Each village was self-sufficient and remained as an isolated unit. There was hardly any interaction between villages, even among the villages of the same tribe. Christian educational institutions played a positive role in providing a basis for establishing a new relationship at the intra tribal; inter-tribal and extra tribal levels. The Christian education was the first agent of tribal solidarity.

Another way the Christian educational institutions nurtured tribal identity within the same group was through the standardization of their language. Often it was the Christian missionaries who gave the script to many of these languages and wrote their first dictionary and grammar.[iii] Gradually the same method was applied to different tribes by introducing English as a common medium of instruction in the schools. Thus the Christian educational institutions were able to expand the relationships among the people of the Northeast from village to tribe, tribe to different tribes and finally to the nation at large. No wonder then, today many people from the region are prominent on the national scene, both in politics and in the bureaucracy.

However the peaceful existence of Christianity and Missionary activities in North Eastern states in India has begun to envisage severe existential threats from the rise of far right Hindu extremism in the recent past. The fallacy propagated by some Hindu extremist activists in North Eastern states in India by portraying Christianity as a diabolical force to destroy Hindu native culture or convert Hindus to Christianity has agitated the people to be hostile towards Missionary activities in some North Eastern states. As an example the communal unrest occurred in state of Manipur in India in 2011 shows the consequences of manipulating public under religious extremism. Technically state of Manipur’s majority belongs to Hindu community representing 60% of the state population, but the propagandas led by hardcore Hindu nationalist groups misguided even moderate Hindus in Manipur to boycott trades and businesses belonged to Christians in 2011. The infiltration of far right Hindu nationalist organization named RSS into the state politics in North Eastern states mainly created the platform for religious hostilities towards Christians. The recently conclude election  in Tripura gave a massive land side victory for BharatiyaJantha Party which is current ruling party of India and RSS has known for its ideological affinity with BJP for many years. The current ideological waves of Hindu extremism spreading over North Eastern states have gutted Christians in those states considerably. Many right wing Hindu historians have a tendency of scorning Christianity in India as a mere colonial heritage introduced by Western invaders. In tracing country’s colonial past, such an accusation has a rationale as British rulers granted special privilege for those native who converted to Christianity, but surprisingly the expansion of Christianity is attributed to the great social welfare campaign led by Christian missionaries from American Baptist , Jesuits. The backward tribes who were trampled and isolated for centuries gained a greater strength from the missionaries and Christian schools in those states. For instance the Italian born missionary Fr. Porcu Mario was known for his bonhomie in state of Assam, where he founded a vocational school that trained many unemployed young people in the state.[iv] On the other hand the Christianity’s service to unify the scattered and weak tribal people in North Eastern India cannot be forgotten. The tribes like Kuki’s and Naga’s in North Eastern India were suppressed and their voice was unheard during the epoch of British Raj, but the arrival Christian Missionaries drastically changed their position into more productive in many way. Instead of following the British modeled “ Macaulay “ style Western liberal education, the Christian Missions in North Eastern states in India  established  more vocational based educational institutes, which helped backward tribes to seek many opportunities for come out of their impoverished status.

The recent hostile environment towards Christians has not yet tuned to a Christian persecution like Pakistan ad some Middle Eastern countries, but if this unrest continues to exist in North Eastern states in India could possibly create havoc in the sub-continent. The waving flag politics practiced by India’s ruling party BharatiyaJanatha Party and its ideological wing RSS has plunged the sword into Christian hearts in many of ways. According to local reports from Nagaland six Pentecostal churches were burnet by Hindu extremists between years 2015 to 2017 and threating and assaults on Christian community in Nagaland have been often reported. Throughout the history India has been a homogenous multi ethnic state and country’s complex past has shown the severe repercussions of raising religious extremism. North Eastern states in India have known for their mystic charm and silence from rest of the other India states, moreover the growth of education and other enterprises in this states under Christian missionary influence have provided a stable for entire North Eastern Indian states, but its peaceful stability can be shattered by recent religious hostilities.

Punsara Amarasinghe is a Doctoral candidate in International Law at National Research University, Moscow. He holds his LL.B from University of Colombo and studied LL.M at South Asian University, New Delhi. Author can be reached at <punsaraprint10@gmail.com